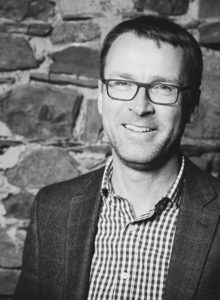 David is a repeat tech and marketing startup entrepreneur. He is the Chief Entrepreneur in Residence for the New Brunswick Government, cofounder of Brilliant Labs, and a past volunteer advisor to NB’s Strategic Program Review.

David is the co-chair of LivingSJ, a movement to support and create a path for all those living in poverty in Saint John, a member of BCAPI and is a board member with our local United Way. David has been involved recently with two social impact documentaries, Code Kids, which followed the journey to get coding back in the classroom, and The Millennial Dream, a documentary questioning whether the values of “The American Dream” have now been replaced by those more aligned with the passions of the Millennial generation.

David is also a mentor at NomadicMentors.com, where he has keynoted and advised close to 50 startups in countries such as Spain, Portugal and Greece. David, his wife, Mary-Gwen, and team are currently in the process of building a new aerial adventure park in Dominion Park called TimberTop Adventures, slated to open in the Summer of 2018. You can connect with him on Twitter @davidalston.

In every community citizens see things that need to be changed and improved upon. While it’s a great thing to have people who care deeply, citizens often fall into a default role that includes mostly a lot of complaining about the problem—perhaps because they feel they don’t have the tools and power to make the change happen themselves.