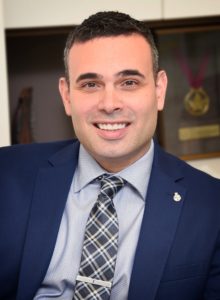 Nick Frate started his professional career in the financial sector, where he spent five years in management. He equally gained leadership experience in the non-profit sector by leading a community organization in Montréal focused on embracing diversity. His career in the public service began in 2007. He has worked in policy, service delivery, both regionally and headquarters throughout his career. He has worked at Canada Revenue Agency, Public Service and Procurement Canada, Employment and Social Development Canada and more recently at Shared Services Canada as Director General, Communications.

Nick holds a Bachelor’s degree from McGill University in Political Science and a Master’s degree in Public Administration from Université du Québec à Montréal. He is the proud recipient of the 2014 Public Service Award of Excellence, the 2016 Governor General of Canada Meritorious Service Medal (Civil Division), the 2016 GTEC Federal Leadership Award and the 2017 IPAC/IBM Social Leadership Award.

He is also the creator and former host of the LeadersGC Twitter Chat Series. The series consists of a team of volunteers who hold Twitters chats and live events whose goal is to create a dialogue between public servants and senior leaders. LeadersGC has created a growing and passionate community across the country by encouraging the sharing of views, ideas and questions on topical policy issues.