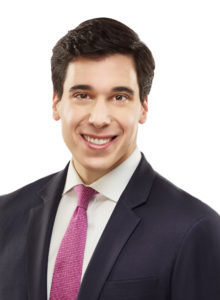 Adam Goldenberg, M.S.M., is a lawyer at McCarthy Tétrault LLP in Toronto and an Adjunct Professor of Law at the University of Toronto.

He advises public and private sector clients on legal risk management, as well as on the law and policy of technological disruption and transformational change. As a trial and appellate litigator, he has appeared as counsel at all levels of court, including in the Supreme Court of Canada, and previously served as Law Clerk to the Chief Justice of Canada and to the judges of the Court of Appeal for Ontario.

Born and raised in Vancouver, Adam holds an undergraduate degree with high honours from Harvard and a law degree from Yale. He is the Chair of Action Canada, a national public policy leadership organization, and the co-founder of Teach For Canada, which works with northern Indigenous communities to recruit, prepare, and support teachers.

He was awarded the Meritorious Service Medal by the Governor General of Canada in 2017.

Ethical AI: How governments can (and should) lead the way

Artificial intelligence empowers governments to deliver public services more effectively, more efficiently, and more responsively. As AI becomes ubiquitous and disruption the norm, citizens will increasingly expect their governments to keep pace. This will force departments and agencies to innovate beyond the strict confines of existing legislative and regulatory frameworks. This workshop will explore...