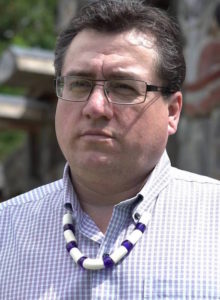 First Sky Media founder James Delorme first became fascinated by technology in the mid 1990’s, when the internet changed the way we communicate with one another. His eyes widened at the new possibilities for passing on cultural knowledge: video-based language lessons, drone-captured footage of our beautiful territories, and virtual reality of ancient village sites.

But James’ ideas were ahead of their time. Until now. When he was the elected chief of the Klahoose First Nation, James brought some of these ideas to life for his people. He also saw the need for education. During his six-year stretch as Chief he recognized that the technology and clean energy sectors are the future. He knew that Indigenous people will need the skills, tools and partners to fully flourish in these emerging economies.

As a leader, James took his job as a mentor and role model very seriously. His focus has always been to build capacity within his own community and strengthen strategic economic opportunities for Klahoose and other First Peoples. He formed First Sky Media in 2017 to continue pursuing these goals as an entrepreneur and visionary.

50 Days: implementation of the TRC and building digital capacity for Indigenous communities
50 Months: Using blockchain technology to implement applications serving the all aspects of our society resulting in improved lifestyle and economic growth
50 years: implementation of indigenous culture with modern mindsets to create a hunatum traditional gifting system with a open source driven...