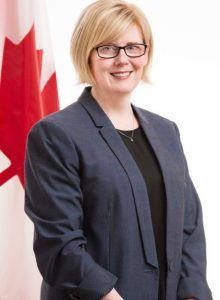 Minister of Public Services and Procurement and Accessibility

Carla has degrees in political science from the University of Ottawa and law from the University of Victoria. Carla has been visually impaired since birth. Before running for federal office, Carla practiced human rights law at both the federal and provincial levels. She chaired the Minister’s Council on Employment and Accessibility in British Columbia, and was an adjudicator with the Workers’ Compensation Appeals Tribunal.

Since her election as Member of Parliament for the federal riding of Delta, BC in 2015 she was appointed the first-ever minister responsible for persons with disabilities in Canada. The Honourable Carla Qualtrough continues to bring an accessibility lens to the discussions around the Cabinet table in her new role as Minister of Public Services and Procurement and Accessibility.

Shifting the Conversation: Building an Inclusive and Accessible Canada

The Honourable Carla Qualtrough will discuss the Government of Canada’s commitment to making services more modern, accessible and inclusive for all citizens. She will highlight the importance of breaking down the barriers to accessibility through culture change, which is a key part of the Government’s proposed Accessible Canada Act. The enabling role of technology and innovation in building...