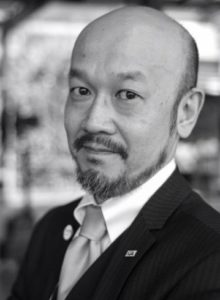 Mr. Zamma has been involved in IT related business for over 25 years.
In NIPPON TELEGRAPH AND TELEPHONE (NTT), he has worked on large scale system development in the Information System Headquarter and brand-new business development in the Multimedia Business Development Division. In 1999, he has transferred to NTT Communications and worked on security and CRM solutions in the Solution Business Department. In May 2002, he joined BearingPoint Japan, responsible for IT strategy of the public sector as a senior manager in the Public Services.

In 2003, he was appointed as an Advisor to CIO, Ministry of Finance. He is in charge of Budgeting Bureau and National Tax Agency. In Apr 2006, he joined Gartner japan, as Vice President in Gartner Consulting. And he named a Special Advisor, IT Policy Office, Cabinet Secretariat (Government Program Management Office) by Prime Minister Koizumi.

In 2012, he started to teach in Graduate School of Tokyo University. He has a course in Public Policy Division. From 2013, this class becomes joint class with Information Science and Technology Division.

He was elected the 22th Chairman of ICA conference in 2015 and collaborating with international organizations, OECD, EU and World Bank.

While digital government will take years to affect every department and process, there are plenty of examples of early adoption and promising success—and many hard-won lessons. In this session, we bring together case studies and concrete examples of government innovation, offering a chance to hear first-hand how transformation is changing the face of civics.